Business Broker: How I got started 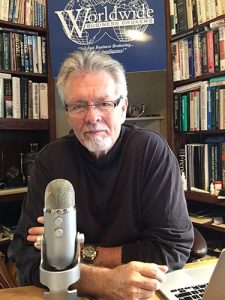 People often ask how – and why – I became a business broker. Well, here’s the short version. (There is a much more detailed story of my journey to business brokering stardom but that will necessarily be a post of epic length and humor and, given the time constraints of the moment, must be told at a later date. But an abridged version of the tale is worth relating here.)

In 1997, I sold a business that I had started six years earlier. The business was not for sale but the suitor was determined to buy; so determined, in fact, that the courts had to get involved. Fortunately, the good guys (me) prevailed and the bad guys (suitor), finally facing reality, made what I considered a far more acceptable offer and the deal was done. (The bad guys subsequently blew through $13 million and ran the business into the ground; which couldn’t have happened to a more deserving guy.)

Suddenly in possession of the proverbial “deep pockets” and with a lot of time on my hands, I landed in Paris, leased a car and wandered around Europe for much of the next four years. But after a while, I noticed that I was gradually becoming more and more antsy to “do something”. (Exploring ancient castles, traipsing around old battlefields, increasing the EU’s per-capita wine consumption and lolling about on the beaches of the Mediterranean and Tyrrhenian seas are all very cool ways to while away some time, but after a few years of this, one has to consider becoming productive again.) So, eventually, on one of my periodic visits to the US, I started looking for a business to buy. Boy, was that an education!

My Experience With a Business Broker

The business that I sold was a chain of several hundred retail outlets so I started looking for something similar but something small that I could scale. I had a general geographic idea as to where I wanted to live and so I started looking in that area using newspapers and what were at the time rudimentary online listing services to see what was available. Nearly every business listing was represented by a “business broker” or real estate agent.

(As a sidebar here, listing a business with a real estate agent is like having an ear, nose and throat guy replace your hip. For you sellers out there, it is unlikely to be a pleasant, let alone successful, experience.)

Because this is the “short” version, I will spare you all the gory details of my wildly chaotic search (and the wildly dysfunctional individuals that I encountered claiming to be business brokers) and fast forward to the point of having found a viable candidate to purchase. It had the makings of a good encore to the business I sold: a retail concept, focus on a product that was in high demand and three reasonably well-located outlets in an area I was familiar with. I thought that, if the numbers were sound, this business had the potential to be scaled as I had done with my previous business. At $500,000, it was moderately priced and within my budget. It was represented by a broker.


A Trip Down the Rabbit Hole

After learning the asking price, the first thing a buyer does – and the first thing that I did – is to ask for the financials which would, presumably, justify that asking price. An informed buyer will be able to glance at the statement of income and expense (P&L) and quickly discern whether anybody on the other side – owner, broker or anybody else – is serious and reasonable or completely delusional. (The latter happens all the time.) So, I asked the broker for the numbers. The ensuing conversation, which continued on and off for the next three weeks, had me wondering if I had wandered onto the set of an American sitcom – or even into a Franz Kafka novel.

The broker, a franchisee of what was the largest franchised business broker system in the US, told me that they will not disclose the numbers until there is a contract in place to buy the business. He advised that the contract should contain a contingency that, if I was not happy with the numbers, I could terminate the contract.

Now, think about that for a moment. This is like seeing an ad that says, “Eggs for $5!”, going to the grocer’s and asking, not unreasonably, “How many eggs do I get for my five bucks?”, and being told that the only way to know how many eggs you get for your five bucks is to put that five bucks on the table. How can you make an offer for something if you don’t know what that “something” is?

Though there are those that, when buying a business, are simply buying a job, most business buyers are buying an income stream and that income stream will likely have a different value for different buyers. But, like any other thing that you buy in life, you cannot estimate its value to you unless you know what the thing – in this case, the income stream – is.

I tried patiently and repeatedly to explain this to our “very experienced” broker but he kept refusing to provide the numbers unless I signed a contract to purchase the business and he kept giving me all sorts of completely ludicrous and inane reasons why I should do this his way.

Tiring of this charade, I eventually told the broker that, unless he produces the numbers, I’m walking; not just away from this particular business, but away from him – and fast! Knowing that a year’s worth of income could be made on this deal and fearing that it was moving rapidly toward the door, he grudgingly agreed to give me the numbers.

Given this guy’s performance to date, I was not very optimistic about what I would receive and, sure enough, when we met two days later, he proved my skepticism was warranted when he pulled out two sheets of paper torn from a yellow pad on which he had hand-written various numbers, one year per sheet, purporting to be the revenue and expense figures for the business I was interested in. No bookkeeper P&Ls, no balance sheet, no tax returns, no inventory figures, no list of equipment, no history, no nothing! I looked at the broker, put five bucks on the table to pay for the coffee and bid him a fond and long overdue adieu.


On my hour drive home and over the next couple of weeks, I continued to be astonished and shocked by the utter lack of professionalism – to say nothing of the lack of consideration for my time and disdain for my intelligence – that this so-called “business broker” showed during this whole process. And the more I thought about it, the more I thought that, if I could find an honest, ethical, professional business broker that I could partner with, I would start a business-brokering business with those characteristics as a foundation and franchise it. And in 2001, that’s exactly what I did.

The bottom line here is that I started Worldwide Business Brokers to solve a problem that I had – and that I was certain others were experiencing, as well. Our brokers – those in the Worldwide Business Brokers system and the independent brokers we train – get immersed in the culture of professionalism. We try our best to screen out the people that we think lack the right attitude, the basic sense of consideration for buyers and sellers, the minimum level of professional comportment or even a decent pair of shoes. Business brokerage is an honorable profession, very much in demand and one that requires knowledge, skill, honesty and the ability to see the big picture. And if you’ve reached the end of this epistle, I commend you for your dedication. You may be one of us!