Buying PART of a Business

Buying Into a Business


Have you ever thought of buying into a business; that is, buying a part of a business? People do it all the time. They buy minority stakes (less than 50% ownership), even stakes (50/50) and majority ownership (more than 50%). Why would someone buy a part of a business? Though it requires some specialized transaction knowledge, there are many reasons for doing so and many methods of accomplishing such a transaction.

Whenever this topic comes up, the first questions we usually hear are, “who would buy into a business?” and “who would sell a portion of their business?” Well, let’s explore the possibilities.

The owners of a business might not want to sell everything at once. In fact, if there are multiple owners, one or more may not wish to sell at all, meaning that only some of the equity in the business can be bought. Most third-party or “outside” buyers will not be interested in buying only a portion – particularly a minority portion – of a business, a condition that makes the manager(s) the most likely buyer of the portion owned by the exiting owner(s).

That said, in the case of a business owned by more than one owner, properly drafted organizational documents will likely provide other existing owners the right to buy an exiting owner’s equity and the exiting owner will only be able to offer its equity to non-owners if the other owners decline to buy the exiting owners’ share.

In any event, great care must be taken when buying a portion of a business as there are more issues to be concerned with compared to buying the entire company. Buyers and sellers, when negotiating for only a portion of a company, are essentially negotiating a partnership. All parties must be aware of not only the restrictions and obligations that a “partnership” involves but what options the parties have for resolving differences and selling their respective equity shares.

An Example of an Insider Buyer 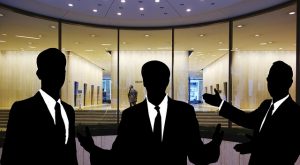 We’ve advised managers or key personnel over the years on the purchase of a portion or all of the business they worked for. And, though all such deals are different, we advised on one that is a classic and has quite a few interesting twists.

It involves a service company that was started by three ownership groups, none of which had the expertise to run the business but all knew that, at the time they started it, their chosen industry was going gang-busters and they felt that, with the right managerial talent in place, they might enjoy a very handsome return on their startup investment.

While forming the entity that would become the business, they began recruiting management talent. They succeeded in hiring an excellent and dedicated manager who had extensive experience in the industry and who proceeded to set up the business’ operations, physical offices, marketing, etc. This manager, as planned, was doing all the work and was reasonably happy with the situation. But a couple of years after launching the business the manager’s spouse apparently mentioned that, “if you’re doing all the work, you should really consider owning a part of the company.” This was where we got involved.

As it happened, the industry was experiencing a downturn that the manager believed would, once its industrial channel rebounded, be temporary. But the downturn provided an opportunity to the manager. The business’ value was much lower as a result of the downturn than it would be after a recovery. On top of that, one of the three ownership groups, whose industry was related and was also experiencing a downturn, was eager to get out. The manager bought 25% of the company by buying this group out. The selling group even provided financing.


Because of the downturn in the business’ industry, the other two ownership groups were not getting the return on their investment that they had hoped for and, when the manager went back to the owners of another 25%, they agreed to sell with the same terms and conditions that the first group had agreed to. Because the manager paid off the first group ahead of schedule, the second group agreed to finance the purchase of their portion, as well. The manager now owned 50% of the company.

The remaining 50%, though requiring more capital, was probably the easiest of all. The owner of that final 50% – a single individual – had gradually lost interest in the business as a result of the industry’s downturn, the modest return on investment he was getting and the fact that his original partners were no longer involved. He also saw how the manager had handled the purchase of the other 50% of the company and agreed to sell his 50%. The manager now owned 100% of the company – and I was privileged to be able to share a champagne toast with this “new owner” after that last closing!

In all, this process – three valuations, three negotiations and three closings – took about three years to complete and the notes were all paid off within three years of the last closing. The former manager – the new owner – brought new enthusiasm to the business at about the same time that the industry started to show some improvement. The business is now three times the size (in revenue) it was when this process started.


Buying a portion of a business requires more thought and documentation than buying a business outright. Buyers and sellers are essentially taking on partners that they probably would not have considered in a different context. In addition, there must be a valuation that the parties can agree on. A business appraiser or a Certified Business Intermediary can provide such a valuation, one that is not likely to be challenged. In addition, an insider buyer – someone or group that the owners know and are familiar with – is far more likely to win seller financing; and seller financing is the easiest route to take as conventional lenders are not accustomed to seeing partial buyouts – and conventional lenders do not like lending on unconventional deals!

However, in the United States, Small Business Administration lenders may be excellent options. We’ve worked with a few over the years that are not only extremely knowledgeable but flexible enough to warrant consideration in this context. We have a podcast in which I interview just such an SBA lender. It may be of interest and you can listen to it here.

I’ve prepared a list of documents that are likely to be part of any purchase of a portion of an existing business. This list will not replace the important advisors that such a transaction requires but it will give you a better understanding of the issues involved and the scope of this approach. It’s free and will be delivered to your in-box immediately upon telling me in the box below where to send it.